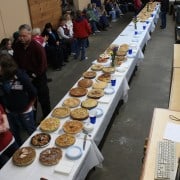 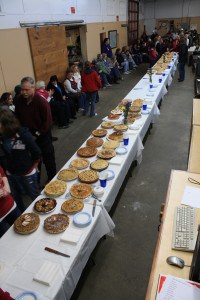 At U-Pick we are offering: Cortland, Empire and Macoun, plus we still have a few Macs (prediction: they won’t last the day). The Macouns are really, really nice right now and are currently the best eating apple at U-Pick.

Later varieties are not ready yet because of slow ripening conditions (that lllllong summer!). We’ll post on Facebook and on our recorded Hotline as soon as these varieties become available.

How to pick your own apples at Mack’s Apples? Drive to one of our many orchards (they are a distance from our Farm Market). Each is self-contained: buy your bag at the orchard and pick! Many types of credit cards accepted. There are pumpkin field(s) at each orchard. Visit our U-Pick page for more info before visiting.

This is the best time of year to visit the Farm Market (hours to right). Fall colors are nearing peak and we have about 200 tons of pumpkins on display. Makes for terrific pictures! We have cornstalks, hardy mums and hay bales for your fall decorating.

Inside the Farm Market, there are many kinds of apples to choose from – and yes we have Honeycrisp in the ‘Market! See “In Season” to the right for the latest fruit and veggie list.

About Google: many customers have told us that our hours are listed on Google as 9-6 daily. This is half true. Those are the hours for our Farm Market. U-Pick hours are 10-5 daily. We do not control our Google profile, but we’re trying to fix that.

We look forward to meeting you, and if you’re visiting us again as your annual tradition, thank you for your enthusiastic support!